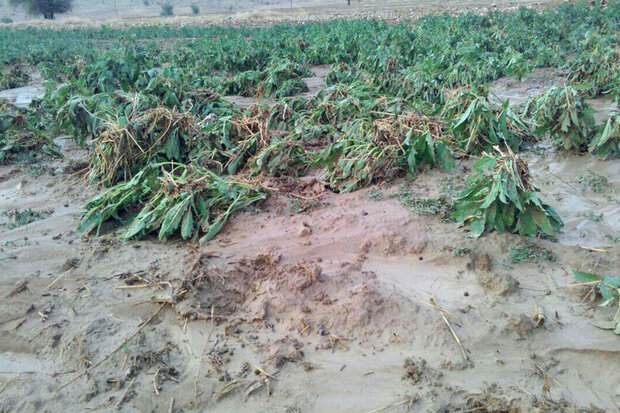 According to IRNA, Abbas Haj Abdulahi, director of the agricultural Jihad of Rafsanjan said: Most of the pistachio orchards were flooded in Keshkoiyeh, Noug and the suburbs of Rafsanjan, and in this regard, the trees of the orchards affected by the flood will dry up.

He advised the farmers to empty the flood mud in the gardens as soon as possible so as not to cause the roots to dry up and the pistachio trees to die. The head of the Rafsanjan Agricultural Jihad added that the flood has caused the most damage to the pistachio orchards of Rafsanjan in the area of ​​Kutsarriz and Ahmedabad, Daefa Razavi.

He also said: The severity of the flood in some areas of Rafsanjan was so great that many trees in these gardens were uprooted. Rafsanjan has more than 80,000 hectares of pistachio orchards and is located 115 km from Kerman provience.

Also, Moqdad Teklozadeh, secretary of the National Date Association of Iran, emphasized that due to the continued rains, it is too early to estimate and announce the amount of damage.

He continued: In general, it can be said that in Kerman province, due to the fact that the rains occurred mostly in the mountainous areas, the amount of damage to the groves is less, but in Bushehr and Khuzestan provinces, the severity of the damage will be greater.

Teklozadeh stated that the damage caused to the palm groves is divided into two categories, and stated: The first category is the damage caused by the fall of products from the palm trees, which happened under the influence of the intensity of rainfall, and the other category is the increase in humidity and its penetration into the product, which leads to dates become sour and moldy and reduce the possibility of keeping them in cold storages and warehouses.

According to the secretary of the National Date Association of Iran; Among date cultivars, the most damages are related to Mozafti variety due to infiltration of moisture and acidity.

According to the announcement of the National Date Association of Iran, the average production of dates in the country is between 1,250,000 and 1,300,000 tons, which decreased to 1,800,000 tons last year due to the heat stress in July and August. However, it is expected that date production will increase by 10 percent this year compared to last year.

An increase of 80 to 90 percent in the total cost of producing dates in Ira...

Dissatisfaction of Samani gardeners with the frost of almond orchards in Ir...
Scroll to top