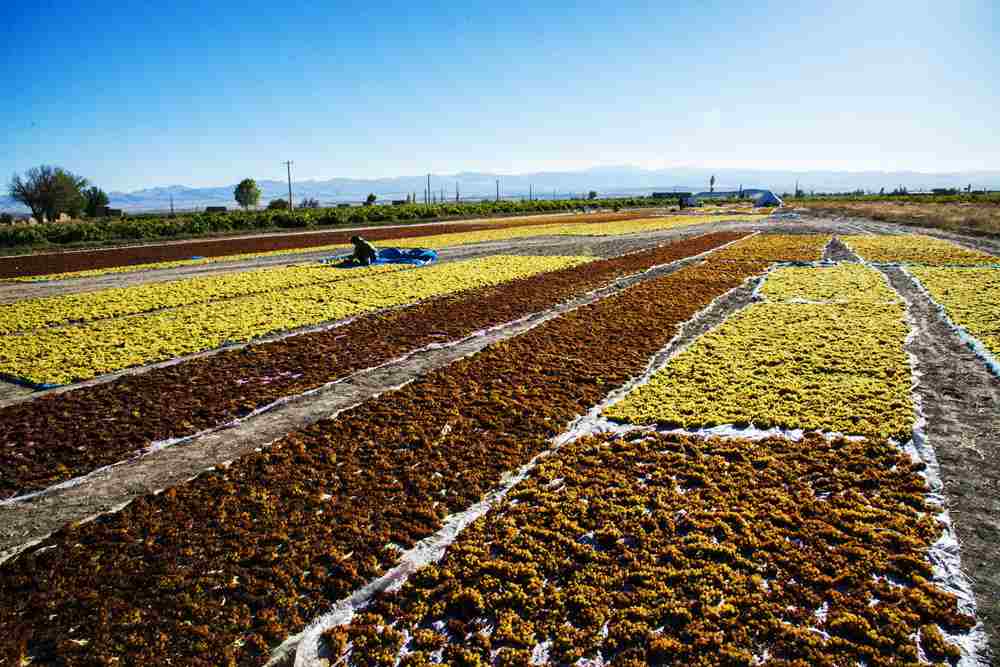 With 29,130 ​​hectares of vineyards,Khorasan Razavi ranks third in Iran after Qazvin and West Azarbaijan provinces in terms of grape cultivation and production.

The beginning of the grape harvest season in this province is at the end of July, and usually up to 70% of the harvest in Khorasan Razavi is used as raisins. The cities of Khalilabad, Quchan, Kashmar and Jagtai, which have a total of 14,848 hectares of vineyards, which is 69% of the area of ​​Khorasan Razavi vineyards, respectively They have the first to fourth ranks in terms of cultivation and production of grapes in this province.

Natural disasters are the bane of grapevine
Khalilabad city is one of the poles of grape production in Khorasan Razavi, which has 6,000 hectares of vineyards and 150,000 tons of grapes are harvested from this area every year.

Hossein Jafari, one of the vinegrowers of this region, stated in an interview with Bazar: 80% of the grapes produced in Khalilabad city are turned into raisins and the rest are transported to other cities and provinces as well as neighboring countries for fresh consumption.

He told about the problems and obstacles grape growers facing: due to the lack of processing and packaging industries in Khalilabad city, a part of the products of this region become waste.

Jafari says: Khalilabad, due to its extensive vineyards, exports dozens of tons of grape leaves to the cities of Khorasan Razavi every year at the same time as the grape harvest season arrives, but this year, these leaves were damaged due to hailstorms.

He says: Several leaf collection centers have been opened in this city and 20 tons of leaves are loaded in 20 trucks from the city every day. This has led to the creation of employment in the villages for 50 days and 800 people every day, but this year the hailstorms affected many gardeners.

Problems of vinegrowers
Khalil Ghanbari, one of the exemplary vinegrowers of Khorasan Razavi, who has succeeded in raising the production per hectare to more than 5 times the standard limit, said in a conversation with Bazar: In recent years, due to lack of water and drought the price of raisins has dropped in the market. And due to low incomes, some gardeners have cultivated alternative crops, including saffron, which in any case have more income.

He admits: Many producers are not familiar with sales or export markets, so their products are misused by dealers.

Ghanbari tells Bazar: In my opinion, the government should prevent alternative cultivation and destruction of valuable grape gardens in the city by supporting and encouraging gardeners, and on the other hand, help gardeners to use new methods and good management in the production of this product.

This gardener reminds: As I said, the producers have low financial power, so they are not able to dry a large amount of grapes, and on the other hand, they are not familiar with markets, so they think it is better to pre-sell their product before harvesting.

He states: If you visit other vineyards, you will realize that even some of their owners did not have the cost of providing pesticides and fertilizers at some times of the year, and now that the consumption of materials has increased by 300%, this problem is bigger than ever.

Khorasan Razavi exports to Europe
The horticulture director of Khorasan Razavi Agricultural Jihad organization called this province one of the poles of raisin production and told Bazar: the main grapes of Khorasan Razavi are in the three cities of Kashmer, Khalilabad and Bardskan, we have about 15 thousand hectares of grape orchards, and more than 50% of the province’s grapes are produced. in these three cities.

Mohammad Miri Disfani Babian stated that this province ranks third in grape production in the country: 75% of the grapes produced in the province are processed.

He said: In Khorasan Razavi, about 29,000 hectares of orchards are planted with grapes, which ranks third in the country in terms of the area and production of this province.

He considered one of the problems in the processing of raisins to be the weakness of the packaging and finishing industries and said: We request the activists in the field of processing agricultural products, including grapes, to update and equip their units.

Miri said: Most of the raisins produced in Khorasan Razavi are exported to European, Central Asian and Arab countries, and on the other hand, quality and microbial load are very important to the countries that are the destination and consumers of our products.

MirBabayan continued that this year, more than 350,000 tons of grapes are expected to be harvested from the province’s gardens.

In response to the problems faced by the vinegrowers of the province, Miri also stated: drought tensions, restrictions on harvesting and the reduction of underground water resources and rainfall have led to the cultivation of low water-demanding crops such as grapes, pistachios, and saffron.

Babian said that most of the production or processing units related to raisins are concentrated in these cities, he said that the development of orchards in a modern style is one of the measures to increase productivity in the agenda of the Ministry of Agricultural Jihad, and in this regard, canopy designs, garden arrangement and construction are implemented in scaffolding methods.

Per capita juice drink in Iran

Iran exports 85% of its pistachios
Scroll to top